The “Who” & “Why” people embark on Entrepreneurship

“Who me?” and “Why me?”, seem to be two questions that appear during times of despair, not times of freedom. They are the questions that make us turn to outside sources for validation, justification, and (insert any hindrance you thought you needed from others).  Well, here it is.

Who me? Yes, You! There is a quote that stuck with me, “God doesn’t call the qualified He qualifies the called.” You see, God made Moses (who didn’t speak well) a messenger, David (a shepherd) a warrior who slew Goliath and became a king, and me (a guy from the projects who came from an underperforming school) an entrepreneur! Boy did He change those qualifications for me! Lol

We all hear the success of business titans/moguls, and we rarely examine their humble beginnings. When we do, it’s to help build a better success story. Let’s look closely and realize Jeff Bezos, Steve Jobs, and Oprah Winfrey are all human and have either failed or been told not to do what they were passionate about. I started by sitting on the steps of my best friend’s house and saying I WILL. That’s what planted the seed! For years I practiced, failed at knowing how to structure a business, not knowing what to charge, and not knowing a lot of other things. Where did I get answers? I got answers by going through the challenges, undercharging until I got it right, listening to others that have been through it, and by being me. I can’t and couldn’t be someone else – I am WHO I am! I read books about funding sources, budgeting and I networked with other entrepreneurs because we are not alone on this trip.

Why me? Because there was something that I wanted to CHANGE. Why did I do it? Because I LOVE VIDEO PRODUCTION and I thought it would be fun doing what I loved to do. I wanted to give back to my community and there was nobody better suited to do it. I saw a lot of potential athletes that needed highlight reels and there wasn’t anyone out there doing them. I saw untold stories that weren’t being captured. The fact that I could create those living memories, the sound, their image, the feel of a moment that even if that person passed away, they would be perfectly captured at that moment, was all the reasons I needed.

“Be the change you want to see.” “Entrepreneur” is the longest way I know to spell change. Well, actually “philanthropist” but you usually become an entrepreneur first. Entrepreneurs embody the change they want to see and endure because the vision is bigger than them. A lot of us will be building blocks, inspiration, and even a symbol for others all because we wanted to change something but instead of asking, “who will?” we will find it in ourselves to be that ENTREPRENEUR (change).

You probably want me to give you the steps. Well, I can’t tell you how to be you. I can only tell you if you are persistent and endure, something will come of it. Make a financial plan, set a realistic timeline and that might be factors to your success but be passionate about what you want to change, and that will be the reason WHY you chose the embark on entrepreneurship. There are millions of people better qualified to be an entrepreneur. However, He qualifies the called. 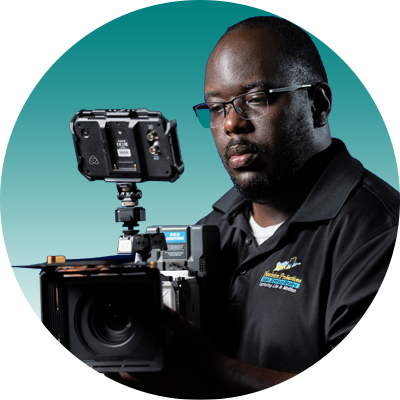 My name is Tristian Jones and I was born on the Island of St. Croix to Caribbean parents who instilled the value of an education but more importantly the value of application. In my life I have come across many naysayers and the one thing I realized, is what most of them have in common is that they are never the one taking a chance “It’s always the ones not doing it, telling you how to do it”.

So, by 11th grade I started my entrepreneurial trip in life working as a freelance videographer for a local TV station and as an editor for anyone that needed the service. Fast forward about 15 years later, I’m a father of three, own two businesses and have my Bachelor of Science in Communications from Southern Connecticut State University.

Why did this podcast choose me?

I’m participating in this podcast because it is my passion to share knowledge and challenge others to do better. It is my goal to lead by example and let others from small countries know that it is okay to dream and pursue those dreams; it’s okay to fail because no one alone has all the answers. The ‘Entrepreneur’s Trip’ is my opportunity to enlighten others and share my experiences with them as I continue to grow business and pursue my passions because I believe in them. This is why I have partnered with likeminded, ambitious individuals who are giving of themselves to tell you how being an entrepreneur can be a trip at times.

Milestones VS. A Finish

Ahhh a story of milestones…Imagine taking a trip to your favorite place. There are no markers, landmarks, and nothing recognizable on this trip, j…

The Internal Motivation of an Entrepreneur: Character, Com…

What is “entrepreneurial motivation?” Asked in another way, “What motivates someone to be an entrepreneur?” The short answer is t…

You'll get emails every time we release a new episode, and when we have special perks for our loyal Trippers!

Email has been submitted.